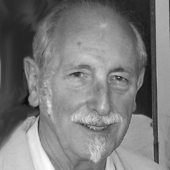 On 15 May 1988 Tuckwell was one of a remarkable assembly of talent that appeared at the
Theatre Royal, Drury Lane, celebrating Australia’s Bicentennial with a gala concert attended by Princess Alexandra.

In 2007 Live Performance Australia presented him with the James Cassius Williamson Award for performing excellence.

The god of the horn
‘I was always fascinated by sounds,’ said Barry Tuckwell. ‘I can remember just playing single notes on the piano, and listening to the overtones, and the sounds and the magic. I took up the piano and violin, but I didn’t have the right digital dexterity for those instruments. Then I overheard a chance conversation between my sister, Sir Charles Mackerras and Richard Merewether who was second horn in the Sydney Symphony Orchestra. I was 13, and she said, “What can we do about Barry? He’s musical, and he must be able to play something.” And the horn player said, “Well, why doesn’t he try the horn?” It was a simple, wonderful and, for me, historic moment, because if they hadn’t been sitting together at that particular moment in that particular coffee lounge in Sydney, I may have become a music critic or something dreadful like that.’

Barry Emmanuel Tuckwell, perhaps the world’s greatest French horn player, was born in Melbourne on 5 March 1931. He came from a musical family. His father played the organ – mostly the ‘mighty Wurlitzer’ in movie theatres – and it was he and an older brother who gave Barry lessons in violin and piano. When the family moved to Sydney he attended St Andrew’s Cathedral School, sang in the cathedral choir, and served as an organist there.

When he was 13 Tuckwell abandoned the piano for the notoriously difficult and fickle French horn, which he studied with Alan Mann at the New South Wales State Conservatorium of Music. His progress was rapid: two years later he was a horn ‘extra’ with the Sydney Symphony Orchestra. After a period with the Melbourne Symphony he returned to Sydney as the SSO’s principal horn player. During his three years with the SSO he performed every major horn concerto in the standard repertory.

His brilliant musicianship inevitably drew him to explore greater opportunities overseas. He moved to London in 1950, studying there informally with the great horn virtuoso Dennis Brain. Though Tuckwell was close to both Dennis and his father Aubrey, and he was influenced by Dennis Brain’s style, his own self-criticism led him to develop a different and totally distinct sound. He also drew inspiration from the recordings of jazz trombonist Tommy Dorsey.

Again, Tuckwell’s performing progress was astonishing: from Assistant First Horn in the Hallé Orchestra in Manchester, via the Scottish National Orchestra and the Bournemouth Symphony, to Principal Horn of the London Symphony Orchestra at the age of only 24. During his 13 years with the co-operatively-run LSO he was the musicians’ representative on its board. In 1963 he was appointed chairman of directors, a position he held for six years; in 1963, too, he made his first BBC broadcast and became Professor of Horn at the Royal Academy of Music. During his years with the LSO, Tuckwell became internationally recognised as a distinguished soloist and recording artist.

In 1968 Tuckwell resigned from the LSO to pursue a career as a horn soloist and, more challengingly, as a conductor. It was a path attempted by a number of other established instrumentalists and even singers, and it was not easy. That Tuckwell succeeded is testament to his brilliance. After André Previn invited him to conduct for the 1977 South Bank Festival in London, there were further engagements in Germany, the Netherlands, Scandinavia and the United States. Many composers wrote works for him, including Oliver Knussen and Richard Rodney Bennett. And, of course, he continued to play the French horn, though now only as a soloist or in small chamber groups – such as the Barry Tuckwell Wind Quintet, which he founded in 1969. He was the first president of the International Horn Society (1970-76) and served another term from 1992 to 1994.

In 1980 Tuckwell returned to Australia to take up the position of chief conductor with the Tasmanian Symphony Orchestra; the one-year appointment extended to four. He made his mainland conducting debut in 1982, leading a Family Concert with the Adelaide Symphony Orchestra.

In 1981 EMI hosted a very special 50th birthday celebration for him at the Queen Elizabeth Hall in London. The participants included Vladimir Ashkenazy, Richard Rodney Bennett, Sheila Armstrong, the Gabrielli Quartet and, of course, the Barry Tuckwell Wind Quintet. The following year Tuckwell began a long engagement as conductor of the Maryland Symphony Orchestra.

On 15 May 1988 Tuckwell was one of a remarkable assembly of talent that appeared at the Theatre Royal, Drury Lane, celebrating Australia’s Bicentennial with a gala concert attended by Princess Alexandra. Tuckwell shared the stage with Dame Joan Sutherland, Richard Bonynge, Sir Charles Mackerras, Douglas Gamley – and, inevitably, Dane Edna Everage.

In 1992 Tuckwell was granted permanent US residency under the then new ‘Extraordinary Ability’ immigration category. He became a US citizen in 1997.

In January 1997 he gave his farewell concerts as a horn soloist with the Baltimore Symphony Orchestra. After several attempts at retirement he decided to return to Melbourne, where he continues to conduct and teach.
The most recorded of all horn players, Tuckwell has been nominated for three Grammy awards. He has been president of the International and British Horn Societies, and patron of the Melbourne International Festival of Brass. As an acknowledged expert in instrument design, he has worked with makers such as Holton and Lawson. He is also a noted editor of horn music, and has written two books on the techniques of horn playing.

In April 2006, he returned to the concert platform to perform Schumann’s Konzertstück for Four Horns with Melbourne’s longest running amateur orchestra, the Zelman Symphony.

Among the many awards Barry Tuckwell has received are Officer of the Order of the British Empire (1965), the Companion of the Order of Australia (1992), Honorary Doctor of Music from the University of Sydney, Fellow of the Royal College of Music, Fellow of the Royal Society of the Arts, the George Peabody Medal for Outstanding Contributions to Music in America, and the Andrew White Medal from Loyola College. He is an honorary member of both the Royal Academy of Music and the Guildhall School of Music in London. And he earned the sobriquet ‘the god of the horn’.

In 2007 Live Performance Australia presented him with the James Cassius Williamson Award for performing excellence. Tuckwell’s sister is Patricia Lascelles, Countess of Harewood.