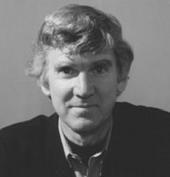 David Keith Williamson was born in Melbourne on 24 February 1942 and brought up in Bairnsdale.

His first play, The Indecent Exposure of Anthony East, was produced by the Tin Alley Players at Melbourne University’s Union Theatre in 1968.

Williamson’s career as a dramatist really began when La Mama produced three of his short plays and The Coming of Stork in 1970, followed by The Removalists in 1971.

‘Wow! Now here’s a play!’
John Bell was heading the Nimrod Theatre in Sydney when he first encountered the work of David Williamson. ‘We were all pretty busy and not well organised when it came to play reading. Some scripts languished for months, or got lost, and we were frequently bawled out by frustrated or disappointed playwrights. Anna [Anna Volska, his actor wife] helped me sort through the pile of scripts and one night yelled out, “Wow! Now here’s a play!” – or words to that effect. It was called The Removalists by a Melbourne writer, David Williamson. I concurred with Anna’s judgement and read the play in one sitting. In fact I couldn’t put it down. Here was an authentic Australian voice with a wry, mor¬dant – and hilarious – sense of theatre. David’s ear for colloquial idiom was uncanny and this explains the scale of his initial success, which he followed through with Don’s Party, A Handful of Friends, The Club and others. Australian audiences were thrilled with the authenticity of his mimicry as well as the gallery of his most successful characters, all variants of the likeable arch-bastard along the lines of Barry Humphries’ Les Patterson. I went to Melbourne to see The Removalists at the tiny La Mama, where David himself was playing the Removal¬ist. With him in the cast was his future wife, Kristin, while Bruce Spence and Peter Cummins played the two cops. Naturally David was delighted that his play was to get an airing elsewhere than La Mama. In Sydney it caused a sensation.’

In those early days he had written ‘subversive sketches’ for university revues and for George Whaley’s Emerald Hill Theatre Company in South Melbourne. His first play, The Indecent Exposure of Anthony East, was produced by the Tin Alley Players at Melbourne University’s Union Theatre in 1968.
Williamson’s career as a dramatist really began when La Mama produced three of his short plays and The Coming of Stork in 1970, followed by The Removalists in 1971. His first commercial success, this won an Australian Writers’ Guild Awgie Award and shared in the British George Devine Award. After the triumph of Don’s Party at the Pram Factory in 1971, Williamson decided to concentrate on writing for the theatre.
With the production in Sydney of The Removalists and Don’s Party, he moved into the theatrical ‘mainstream’. Almost all his plays were written about – and for – the educated, affluent, liberal-minded middle class. They focus on the rituals of social behaviour with wit, and with realistic, recognisable settings, characters and dialogue.

His prolific output far exceeds that of any other contemporary Australian dramatist, and his commercial success in unmatched.

Williamson’s plays have been translated into many languages and there have been major productions in London, Los Angeles, Washington and New York – where The New Yorker hailed him as ‘Ibsen in the Antipodes’.

Several of Williamson’s plays have been televised and produced as films, most notably The Coming of Stork (filmed as Stork), Don’s Party, The Club, Travelling North, The Removalists, Emerald City, Sanctuary and, Brilliant Lies and Face to Face. He has also written original screenplays for Libido, Petersen, Eliza Fraser, Duet for Four, Gallipoli, Phar Lap, The Year of Living Dangerously and Balibo.

His television scripts include The Perfectionist, the miniseries The Last Bastion, A Dangerous Life and The Four-Minute Mile, and the series Dog’s Head Bay, which he wrote with his wife. He wrote the telemovie adaptation of Neville Shute’s On the Beach, which was nominated for a Golden Globe Award and won the AFI Best Miniseries Award. His directing credits include Arthur Miller’s All My Sons and John Power’s The Last of the Knucklemen for the State Theatre of South Australia and his own Sons of Cain for the Melbourne Theatre Company, which toured nationally.

In 2005 Williamson announced his retirement from main stage productions. He ‘retired’ to Noosa, Queensland where, in 1991, he and his wife, writer Kristin Williamson, were instrumental in founding the annual Noosa Longweekend cultural festival. He and Kristin were in the cast of his play Charitable Intent, which had its premiere in the 2002 festival. Flatfoot premiered there in 2003, Birthrights in 2004, Operatorin 2005, and Strings Under My Fingers in 2006.

Williamson’s stepson Felix Williamson and his son Rory Williamson are both Australian actors. Rory starred in the 2001 revival of The Coming of Stork at the Stables Theatre in Sydney, produced by Felix’s Bare Naked Theatre Company.

David Williamson has won four AFI awards and eleven Awgies. He has received honorary doctorates of Literature from the University of Sydney (1988), Monash University and Swinburne University of Technology (1996). His work has been recognised with the Australian Film Institute’s Award for Best Screenplay (four times) and, in 1996, the United Nations Association of Australia Media Peace Award. In 2005 he received the Richard Lane Award for Services to the Australian Writers’ Guild. He has been named one of Australia’s Living National Treasures. He was made an Officer of the Order of Australia in 1983.