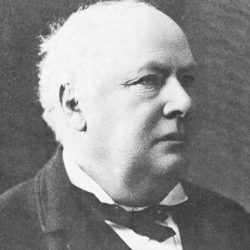 The son of a small-time actor, George Selth Coppin was born in Sussex on 8 April 1819.

From the age of 16 he earned his living as a peripatetic actor, fiddle player and singer. For six years from 1842 he lived with an actress, Maria Watkins Burroughs, who was nine years older than he was.

Coppin came to Australia in 1843. He made his colonial debut at the Royal Victoria Theatre, Sydney.

The man of many parts
‘Mr Coppin is a good business man and, I believe, a truly honourable and upright man,’ said British actor Charles Kean in a letter to his daughter, written during his 1864 tour of Australia under Coppin’s management, ‘but he is a common man, and possesses a certain rudeness of manner which is very unpleasant when things do not run smoothly, and at the present time he dives both hands deep into his side pockets and looks both blank and black, and gives short and curt answers. In fact he sympathises more with himself than with the sufferings of Mrs Kean. This is truly natural, but a well bred man of the world would make it appear otherwise. Mr Coppin is going to Sydney to act on his own account and I will be glad of it, for it will give him employment and that will keep him from grinding. I shall be very glad to get away from these colonies…’

This ‘common’ man was an actor, entrepreneur, innovator, politician and philanthropist. He was also one of the most influential figures in 19th century Australian theatre. The son of a small-time actor, George Selth Coppin was born in Sussex on 8 April 1819. He made his stage debut when he was still a toddler and had a double act with his sister when he was seven. From the age of 16 he earned his living as a peripatetic actor, fiddle player and singer. For six years from 1842 he lived with an actress, Maria Watkins Burroughs, who was nine years older than he was.

Coppin came to Australia in 1843. He made his colonial debut at the Royal Victoria Theatre, Sydney, invested his earnings in a hotel, lost heavily, and scurried to Hobart Town. After establishing himself as a comic actor in Tasmania he took his company to Melbourne, introducing Victorians to the delights of The School for Scandal. In 1846 he tackled Adelaide, where he converted the billiard room of the Temple Tavern in Gilles Arcade into the New Queen’s Theatre. This lost so much money that he was forced to try his luck on the goldfields, where he provided lurid dramas to entertain the diggers. For a while he ran a theatre in Geelong. In 1850 he returned to Adelaide, transforming the old Queen’s Theatre in Gilles Arcade into the Royal Victoria; it remained Adelaide’s principal playhouse until 1868.

On a brief return visit to England Coppin engaged the mercurial Irish actor Gustavus Vaughan Brooke and purchased a prefabricated iron theatre in Manchester. He had it erected in Melbourne in 1855, on the corner of Lonsdale and Stephen (Exhibition) Streets. It was uncomfortably cold in winter and unbearably hot in summer; officially the Olympic, it soon became known as ‘The Iron Pot’. After serving for a while as a Turkish bath, it was abandoned in 1894.

In 1855 Coppin married Brooke’s sister-in-law, Harriet Hilsden. The following year he purchased the Theatre Royal in Bourke Street, Melbourne, and the Cremorne Pleasure Gardens at Richmond, on the banks of the Yarra. In 1858 Coppin staged the first balloon ascent in Australia. That same year he was elected to the Richmond Council and won a seat in the Victorian parliament. His wife, Harriet, died in 1859; a couple of years later Coppin married Lucy, his wife’s daughter by a previous marriage.

In 1862 he built the Haymarket Theatre in Bourke Street. There he presented the American actorJoseph Jefferson, world famous for his perennial appearances in Rip Van Winkle. In 1863 he brought the aforementioned English actors Charles and Ellen Kean to Australia. He rebuilt the Theatre Royal after the fire of 1872 and brought J.C. Williamson and Maggie Moore from the United States to open it – a visit that eventually resulted in Williamson assuming a commanding position in Australian theatre.

After a year-long series of farewell performances, Coppin retired from the stage, but the bank crashes of the 1890s forced him to return to the theatre. He recouped his losses with the production of elaborate, long-running pantomimes in association with Bland Holt. One of his daughters, Lucy, became Bland Holt’s secretary.

George Coppin died in Melbourne on 14 March 1906. He had built six theatres, brought some great theatrical talent to this country, and effectively introduced the star system here. His papers are preserved in the State Library of Victoria.

Coppin was an astute, ruthless and imaginative entrepreneur, whose interests range far beyond the footlights. He had interests in mining and racing; he was the first to import ice, live turtles and deer for venison; he also imported English thrushes, white goldfish, white swans, and camels, some of which found their way into the Bourke and Wills expedition. And he was involved in the introduction of the cable car system in Melbourne; opened the first roller skating rink in Australia; organised the first balloon ascent; developed the Mornington Peninsula resort of Sorrento and a tramway to service it; and his copyright agency controlled the performing rights to thousands of plays.

His less than scrupulous business practices were, to some extent, balanced by his frequently innovative philanthropy. He pushed for a post office savings bank, helped found the Victorian Humane Society and the St John Ambulance in Melbourne, and founded free dispensaries in Richmond. He established Gordon House for homeless men. The Old Colonists’ and Old Actors’ Homes in the Melbourne suburb of Fitzroy still care for the elderly in a unique village setting. There is a portrait of him in the hall there, and a bust that proudly surveys the immaculately maintained gardens.

There’s a street named for him in Richmond, and a commemorative plaque in the foyer of the Comedy Theatre in Melbourne, which stands on the site where Coppin built his Olympic Theatre in 1855. At Sorrento, his grand house, The Anchorage, still sits atop the hill, while the Nepean Historical Society has its home in the Mechanics’ Institute whose erection Coppin sponsored in 1877. And in Adelaide, thanks to the efforts of a handful of passionate preservationists, Coppin’s Royal Victoria Theatre – or at least a significant part of it – is still standing in Gilles Arcade. It was proclaimed a heritage site in 1984 and is again used as a performance venue.

And in 1990 Coppin again strode the stage. At the Carlton Courthouse Theatre in Melbourne he was portrayed by actor Gary Files in Occupation: Comedian, a play by Garrie Hutchinson with music by Joe Dolce. It was revived at the Old Colonists’ Homes in 1906, to mark the centenary of their benefactor’s death.