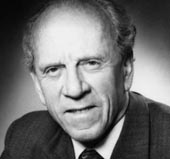 The most influential arts administrator this country has so far produced was born in the Perth suburb of Kalamunda, Western Australia, on 24 February 1906.

He became a teacher and studied arts at the University of Western Australia.

Making dreams come true
‘I do not know where Dr Coombs’ vision came from,’ wrote John Sumner. ‘It is interesting that, likeJohn Maynard Keynes (who was behind the formation of the Arts Council of Great Britain and became its first chairman), Dr Coombs was an economist. Perhaps this gave both men an appreciation of the true value and purpose of money and how it should be used for the general good. They also had something else in common: both were influential figures in government circles. This leads to an important point. In Australia, as in the UK, if a champion of the arts is close to the head of government, the arts will flourish; conversely, the lower the arts portfolio is relegated, the less will the arts prosper. Proof of this is seen in the decline in the fortunes of the Australia Council, and of the arts ministries in various states, when the arts are lumped in with several other portfolios and, even worse, appointment to the resulting ministry is referred to as a demotion. Fortunately, when Dr Coombs decided to commemorate the visit of the Queen, his love of the arts came to the fore and the Australian Elizabethan Theatre Trust was formed. Fortunately also for the arts, their champion, as well as being Governor of the Commonwealth Bank, had worked under Prime Ministers Curtin, Chifley and Menzies: he was experienced and influential in the political world. He was a remarkable and humane man.’

The most influential arts administrator this country has so far produced was born in the Perth suburb of Kalamunda, Western Australia, on 24 February 1906. He was christened Herbert Cole Coombs, but he hated both ‘Herbert’ and ‘Bert’ and was not particularly keen on ‘Cole’. But he really liked his affectionate nickname, ‘Nugget’.

A scholarship enabled him to study at Perth Modern School. He became a teacher and studied arts at the University of Western Australia. At that stage in his life Coombs was not particularly interested in the performing arts, though he acted in Shaw and Barry plays at teachers’ college, and heard Melba sing and saw Pavlova dance when they visited Perth.

In 1932 a further scholarship took him to the London School of Economics where he completed a PhD on central banking. He was greatly influenced by the economic theories of John Maynard Keynes, whose dissertation General Theory of Employment, Interest and Money Coombs described as ‘the most seminal intellectual event of our time.’ He was a frequent visitor to the Old Vic, seeing classic and contemporary drama, ballet and, somewhat less receptively, opera.

From 1934 to 1939 Coombs worked as assistant economist for the Commonwealth Bank. He joined the federal Treasury and from 1942 he was in charge of Australia’s wartime rationing policy. He was director-general of post-war reconstruction from 1943 to 1949. It was during this period – in 1944 – that the American conductor Eugene Ormandy visited Australia for the ABC and made a series of recommendations regarding orchestras, concert halls and the establishment of a national theatre. Coombs saw such proposals as his department’s responsibility, but nothing could be done until the war finished.

The visits of Ballet Rambert in 1947 and the Old Vic in 1948, and the flowering of Gertrude Johnson’s National Theatre Movement in Melbourne, led Coombs to ask the British Council to suggest an appropriate person to advise Prime Minister Ben Chifley on the establishment of a national theatre. Accordingly, in 1949, the British theatre director Tyrone Guthrie visited all states and formulated a scheme that was eventually accepted by federal and state governments. Coombs was disappointed with Guthrie’s work but, ever the pragmatist, he realised that it was the only practical way to proceed. Perhaps fortuitously, the Chifley Labor government was defeated in December 1949. The new Prime Minister, Robert Menzies, had little sympathy for the arts, and the scheme was dropped. Coombs, by then Governor of the Commonwealth Bank, prudently bided his time.

The 1953 visit of Anthony Quayle and the Shakespeare Memorial Theatre Company led to renewed calls for a national theatre. Coombs enlisted the support of Charles Moses, general manager of the ABC, John Pringle, editor of the Sydney Morning Herald, and Melbourne businessman Ian Potter. They realised that the impending visit of the young Queen Elizabeth in 1954 provided a perfect launch pad. Knowing that Menzies was an ardent royalist, Coombs persuaded him that the perfect way to commemorate the royal visit would be to establish an organisation to encourage interest and participation in the arts. The result was the Australian Elizabethan Theatre Trust. A non-profit public company limited by guarantee, it was founded in September 1954 to ‘provide a theatre of Australians by Australians for Australians’. According to Age writer Bruce Grant, ‘It emerged like a genie from one of Dr Coombs’ mysterious pockets.’ The good doctor was the Trust’s first chairman. A public appeal raised £90,000, the Commonwealth contributed £30,000, and continuing support was promised by state and local government. The Trust’s first executive director was Hugh Hunt, an experienced English man of the theatre.

Under Coombs’s chairmanship things progressed swiftly. The Trust acquired Fuller’s old Majestic Theatre in the Sydney suburb of Newtown, refurbished it and renamed it the Elizabethan. John Sumner was appointed manager. It reopened on 27 July 1955 with an attraction ‘borrowed’ from Garnet H. Carroll – a season of Terence Rattigan plays with Ralph Richardson and Sybil Thorndike. The Trust’s first ‘in-house’ production was Euripides’ Medea, a starring vehicle for the great American-based Australian actress Judith Anderson.

Other early Trust productions included Ray Lawler’s landmark play Summer of the Seventeenth Doll and Sandy Wilson’s British musical spoof The Boy Friend. By 1956 the Trust was touring its own drama and opera companies. In addition to his work with the AETT, Coombs was a member of the Council of the Australian Ballet School from 1958 and a director of the Australian Ballet Foundation from 1962 to 1967.

In turn, NIDA established the Old Theatre Company in 1962. Coombs fostered links with commercial managements and encouraged state-subsidised theatre companies, and he constantly pushed for increased government support. By 1968 the AETT was distributing over $1.5 million – $1 million from the Commonwealth and $550,000 from the states. The Trust supported the building of the Sydney Opera House and the Victorian Arts Centre, but its policies tended to marginalise smaller companies and contributed to the weakening of the commercial theatre sector.

In 1968 the John Gorton government followed up an initiative of Harold Holt, and established the Australian Council for the Arts to administer federal support for the arts sector. Coombs was its first chairman. The appointment coincided with his retirement as chairman of the AETT and Governor of the Reserve Bank. This left him with more time to devote to other worthy community organisations. From 1968 until 1976 he was chancellor of the Australian National University (which he had been instrumental in founding) and chairman of the Australian Council of Aboriginal Affairs.

In 1971 Coombs was The Australian’s inaugural Australian of the Year. He continued to steer and develop the Australian Council for the Arts under a succession of Prime Ministers: Gorton, McMahon and Whitlam. In 1974 Whitlam transformed the ACA into the Australia Council. Coombs served as its chairman for one year and then retired. He was succeeded by Peter Karmel.

Coombs’ later years were notable for his continuing devotion to Aboriginal and environmental issues.
An interviewer once asked Coombs what he thought was the function of a bureaucrat. ‘Well,’ he said, ‘A good bureaucrat makes other people’s dreams come true. So far as I have an achievement in relation to the arts, it’s that I helped some people have their dreams come true.’ At the grand old age of 91, Nugget Coombs died on 29 October 1997. ‘He was,’ said John Sumner, ‘a remarkable and humane man.’